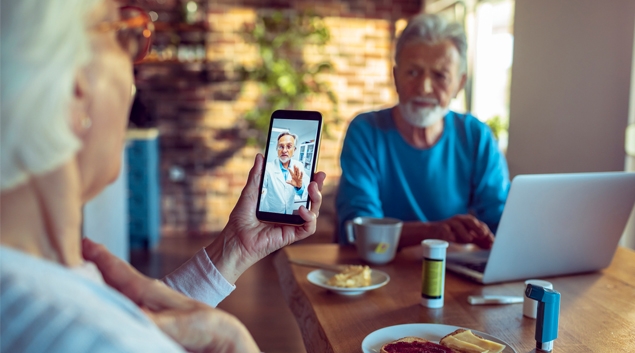 Telehealth has played a critical role in healthcare delivery during the COVID-19 pandemic, and this is especially true for older Americans. Given the numerous restrictions and guidelines that have been enacted to help slow the spread of the coronavirus, virtual care has been critical in helping seniors safely get the care they need.

Yet, according to data from Medicare-focused digital health company GoHealth, three in five Medicare beneficiaries and seniors nearing eligibility admit to not knowing how to use video call technology. The main issues boil down to access and education.

Prior to the pandemic, reimbursement had been an issue as well, with stringent rules from the Centers for Medicare and Medicaid Services about what is reimbursable and what is not representing a barrier to entry. Recently, though, the regulatory environment has eased somewhat, with CMS making allowances for reimbursement, and Congress mulling permanent changes to the payment landscape when it comes to virtual care.

This allowed providers to rapidly pivot to virtual modalities when it became evident that the pandemic would cause a shift in utilization. This has been happening steadily throughout the year: According to a survey released in May by the Alliance of Community Health Plans and AMCP, 72% of U.S. consumers have dramatically changed their use of traditional healthcare services, with many delaying in-person care and embracing virtual care due to the public health crisis.

Among the respondents, 58% cited their doctor as the most trusted source of information about the virus, but only 31% felt “comfortable” visiting their doctor’s office, leading to significant changes in attitudes and behavior toward standard healthcare services.

That has led to concerns about properly educating patients on the use of telehealth, particularly seniors, who often lack access and technological acumen, although every senior is different.

“Seniors aren’t homogenous,” said Dr. Paul Hain, chief medical officer at GoHealth. “Some are comfortable with the technology, some are not.”

According to the data, there has been a massive uptake in telehealth in Medicare in particular, rising from about 10,000 virtual visits per week to about 1.7 million – with older Americans comprising a significant chunk of that total.

“Is telehealth good for our seniors? I think the answer is yes, because they’re so susceptible to COVID,” said Hain. “The second question is, ‘Is this a flash in the pan?’ And I think no, because there are a lot of areas in which it’s appropriate.”

There are many ways to derive value from virtual care experiences, but the challenge is making sure that seniors know how to do it. The problem isn’t really the seniors themselves, but rather the challenges they face. In Texas, for example, there’s a lack of access to broadband, making telehealth a tricky proposition for certain populations, including minorities, rural residents and, yes, older Americans.

Framed in that way, it’s a multilayered issue involving access, technological feasibility and getting seniors comfortable with the modality. That requires investment in areas such as infrastructure and patient communication.

“If you take for instance Medicare Advantage plans, where you might have physicians in a fiscally aligned manner so they don’t have to worry about billing for every little thing, you find they can more quickly and excitedly transition to telemedicine,” said Hain. “It’ll be interesting to see how this works out.”

Since “access” is such a broad term, the potential issues with it are varied. Some people lack access due to a lack of economic opportunity. If a patient can’t afford the access, there are few options left to them. By contrast, some geographic regions, mainly rural, lack access altogether, as is the case in much of Texas. In still other regions, cell phone coverage doesn’t support the latest high-speed data transmission due to a possible lack of infrastructure capabilities.

In that context, Hain sees the solution as a combination of public and private efforts. An example can be found in something as simple as the mail.

“As a country we came together and said it’s important for everyone to have mail access,” said Hain. “It may be time to say we need people to have broadband access – that’s the new mail.”

Another boon to access will be the switch from fee-for-service care delivery to value-based care models, which Hain sees as going a long way toward solving the cost conundrum in the U.S.

“We’re talking about aligning things for the ability to improve telehealth, given telehealth has the amazing ability to be the most efficient modality for both the providers and their patients,” he said. “That means aligning value will move it the fastest.

“An example of this is that telehealth is great for mental health issues,” said Hain. “Those are real efficiency gains, but if those providers are having to bill for every little thing they’re doing, that becomes kind of onerous and introduces gamesmanship, whereas in a capitation arrangement you want to do it in the most efficient way possible to get people the most benefit. Alignment in the value-based care arena is critically important.”

Communication, meanwhile, can be improved in a number of different ways, and different provider groups and insurers will come up with different ways to make people comfortable. The best ideas will ultimately win. Providers can still have in-person visits – have to have them, in fact – but it will be paramount for hospitals and other healthcare organizations to invest in communication with their patients, especially since good communication fosters a stronger relationship between the patient and their primary care doctor.

Medicare Advantage plans will succeed more quickly, said Hain, because in such plans the doctor that is selected by the patient will help them understand telehealth to a certain extent, a trend that GoHealth is already beginning to see.

“In the payment environment, it’s good for people under capitated arrangements,” he said. “You’re already aligned. We’re going to have to continually worry about how providers are being paid for their time, because that will dictate to their practice whether they can continue to do it. On the regulatory side, if you’re a smaller practice, having communication platforms that aren’t subject to the same HIPAA standards can really break the deal for a small practice, because of so much time and money involved.

“I expect the telehealth genie will not go back in the bottle,” said Hain. “It will slow it down if we get the regulatory side and the payment side wrong, but I don’t think we’re going back to where we were before. I think it’s going to be here to stay.”

Taking Stock of Progress and Looking Ahead

This December, we look back at a challenging year – and forward to what we hope is a better, stronger, more connected and resilient healthcare ecosystem.

The Kansas City metro has emerged from … END_OF_DOCUMENT_TOKEN_TO_BE_REPLACED

A study finds that improving ventilation can … END_OF_DOCUMENT_TOKEN_TO_BE_REPLACED

The MUSA robotic platform, developed by MicroSure. Image: MicroSureA surgical robot capable of reconnecting vessels with diameters as tiny as 0.3 millimeters has been tested on human patients, and the results are promising. New research published in Nature Communications describes MUSA—the first robotic system designed exclusively for performing reconstructive supermicrosurgery. Using the system, surgeons were able to reconnect vessels with diameters between 0.3 and 0.8 … END_OF_DOCUMENT_TOKEN_TO_BE_REPLACED

Benefit to Employee HOW DOES THE EMPLOYEE BENEFIT? The employee can choose to participate in the plan or not. If the employee participates in the plan part of his/her taxable wage is converted into tax-free benefits. This can be a big tax savings for the employee and … END_OF_DOCUMENT_TOKEN_TO_BE_REPLACED