With the Trump administration announcing two days before Election Day that Georgia’s healthcare.gov website will no longer provide options for residents shopping for plans starting in 2023, consumers will need to rely on private brokers, insurance companies, agents and commercial websites.

Republican Georgia Gov. Brian Kemp, who pushed the plan, argued that this would give private entities an opening  in the fall of 2022, when the following year’s plans will be marketed, to aggressively advertise and compete for consumers and increase the number of choices.

The plan, which generated overwhelming opposition and almost no support during the public comment period, has been greeted warily as a test of how radically states can alter the rules of the Affordable Care Act under the Trump administration. Skeptics say Georgia’s plan would resurrect the chaotic and murky marketplace that existed before the ACA was passed, in which individual brokers would push the policies that paid the biggest commissions, even if they didn’t have the best price or offered coverage with major loopholes.

“The payoff doesn’t strike me as being there,” said Joseph Antos, a health care expert at the American Enterprise Institute, a right-leaning think tank in Washington, D.C. “I’m sure people in Georgia, just like everyone else, have had the federal website URL [healthcare.gov] pumped into their heads. The people who would be newly interested in exchange coverage are clearly not going to know where to go.”

The timing of the announcement is notable, coming on the eve of a national election in which President Donald Trump and Republicans have been on the defensive about their efforts to unravel the Affordable Care Act. Georgia has also been targeted in recent weeks by the campaign of Democratic presidential nominee Joe Biden, who visited the state last week.

It also comes just as the 2021 open enrollment period has gotten underway. The federal exemption, known as a 1332 waiver, is expected to face legal challenges, because the ACA permits states to try out different methods only if they lead to at least the same number of people getting insurance.

The number of Georgians purchasing health insurance through the federal marketplaces has declined during the Trump administration. 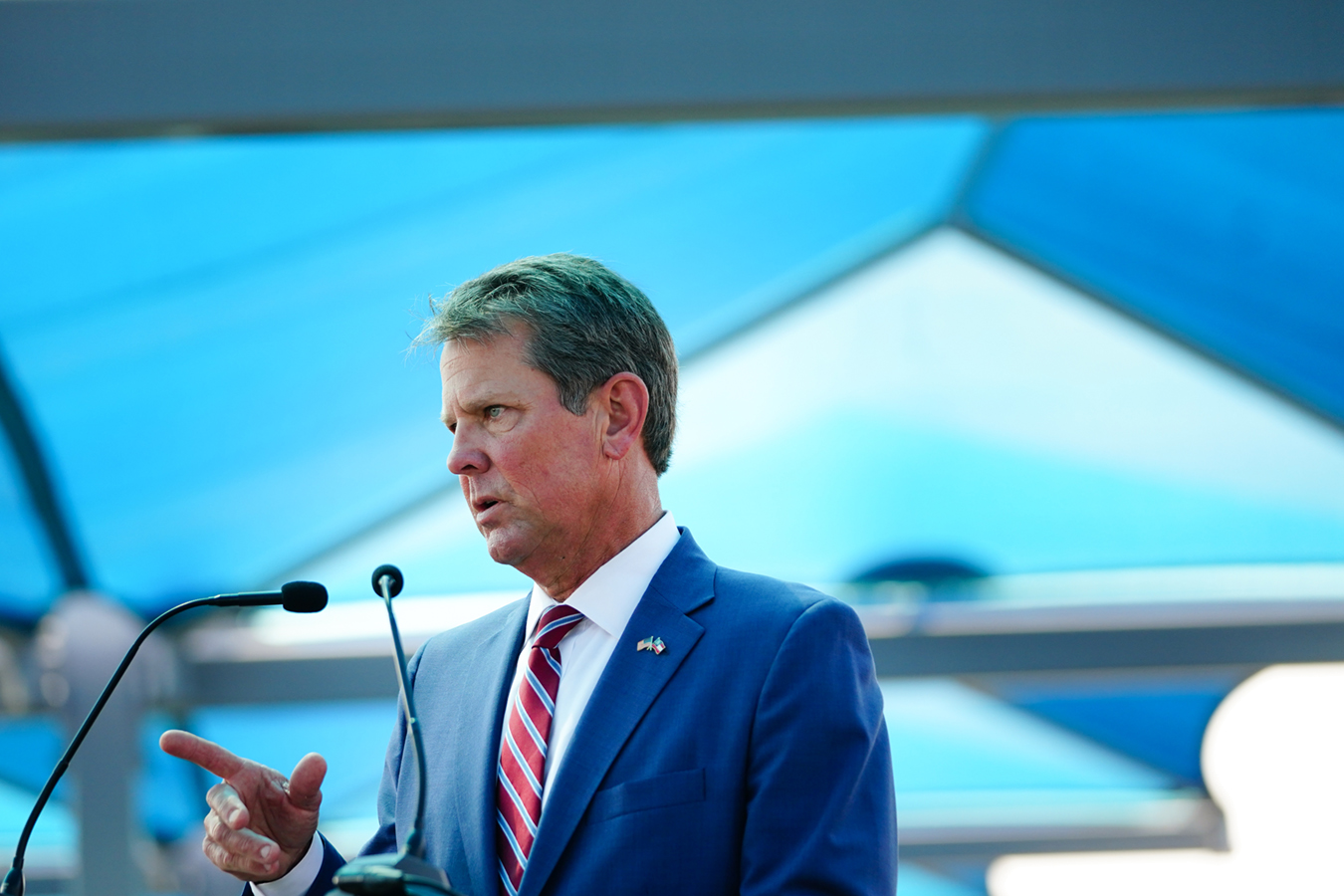 Republican Georgia Gov. Brian Kemp, who pushed the plan, argued that this would give private entities an opening to aggressively advertise and compete for consumers and increase the number of plans sold for 2023.(Elijah Nouvelage/Getty Images)

The Kemp administration predicts the change will increase enrollment by 6.8% for plans starting in 2023. If successful, that would partially reverse the coverage losses that have occurred under Trump. Enrollment dropped from 587,845 in 2016 to 458,437 in 2019, although it climbed a bit to 463,910 this year. Georgia’s overall drop of 21% was twice the national average decline, according to KFF data. (KHN is an editorially independent program of KFF.)

Laura Colbert, executive director at Georgians for a Healthy Future, a nonprofit advocacy group, said the enrollment decline in Georgia plans was due to increases in premiums and cuts in outreach efforts. Since Trump took office, enrollment has decreased in 39 states.

In her approval letter, Seema Verma, administrator of the federal Centers for Medicare & Medicaid Services, said the enrollment outreach set up by the Obama administration, known as the Navigator program, “has simply had limited impact on reducing the overall uninsured rate in Georgia, suggesting there may be a more effective way to reach and engage consumers. In fact, one of the key criticisms of HealthCare.gov and the implementation of the Navigator program is that it has squeezed local agents and brokers out of the market with government-funded competition.”

But there has been almost no public support for the plan, even among people within Georgia’s insurance and brokerage industries. Seventy-two of 75 organizations submitting formal comments opposed the change, and 1,746 of 1,751 individual letters favored the unified format of healthcare.gov, where all plans are listed and can be compared on price and other factors.

“Even though I was educated at an elite university, it is still difficult to be certain I am choosing the best option for my situation,” one commentator wrote. “I am certain that the proposal to force me off the exchange and into the hands of for-profit insurers or brokers will benefit them and not me.”

Christen Linke Young, a fellow with the USC-Brookings Schaeffer Initiative for Health Policy, said Georgia’s proposal says “over and over there will be new options and new competition, but brokers already exist. The waiver doesn’t enable new options; it just takes away healthcare.gov.”

Tara Straw, a senior policy analyst at the Center on Budget and Policy Priorities, said that for people too poor to afford private plans, healthcare.gov has been an effective way to redirect consumers to state Medicaid programs. Private brokers, she said, have no such incentive to help them access public coverage. “These are thousands of people who could be lost along the way,” Straw said.

Brokers get paid more to sell short-term plans that do not have to offer as many benefits as ACA-complaint plans: on average $8.42 per member each month for the short-term plans versus $6.88 for the ACA plans, according to Georgia’s calculations. Georgia officials said that was too small a difference to “drastically” change broker behavior.

The Kansas City metro has emerged from … END_OF_DOCUMENT_TOKEN_TO_BE_REPLACED

A study finds that improving ventilation can … END_OF_DOCUMENT_TOKEN_TO_BE_REPLACED

The MUSA robotic platform, developed by MicroSure. Image: MicroSureA surgical robot capable of reconnecting vessels with diameters as tiny as 0.3 millimeters has been tested on human patients, and the results are promising. New research published in Nature Communications describes MUSA—the first robotic system designed exclusively for performing reconstructive supermicrosurgery. Using the system, surgeons were able to reconnect vessels with diameters between 0.3 and 0.8 … END_OF_DOCUMENT_TOKEN_TO_BE_REPLACED

Benefit to Employee HOW DOES THE EMPLOYEE BENEFIT? The employee can choose to participate in the plan or not. If the employee participates in the plan part of his/her taxable wage is converted into tax-free benefits. This can be a big tax savings for the employee and … END_OF_DOCUMENT_TOKEN_TO_BE_REPLACED