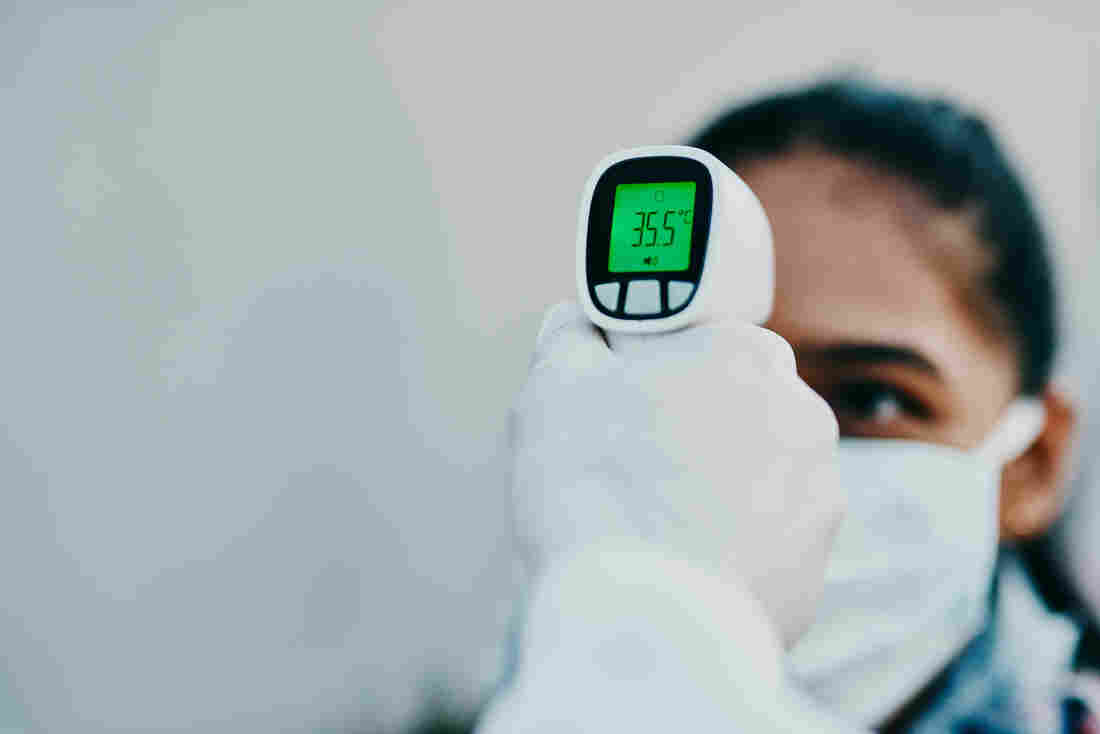 Expect to see more forehead thermometers in workplaces and airports as a way to screen people for fever, which could be a sign of COVID-19. 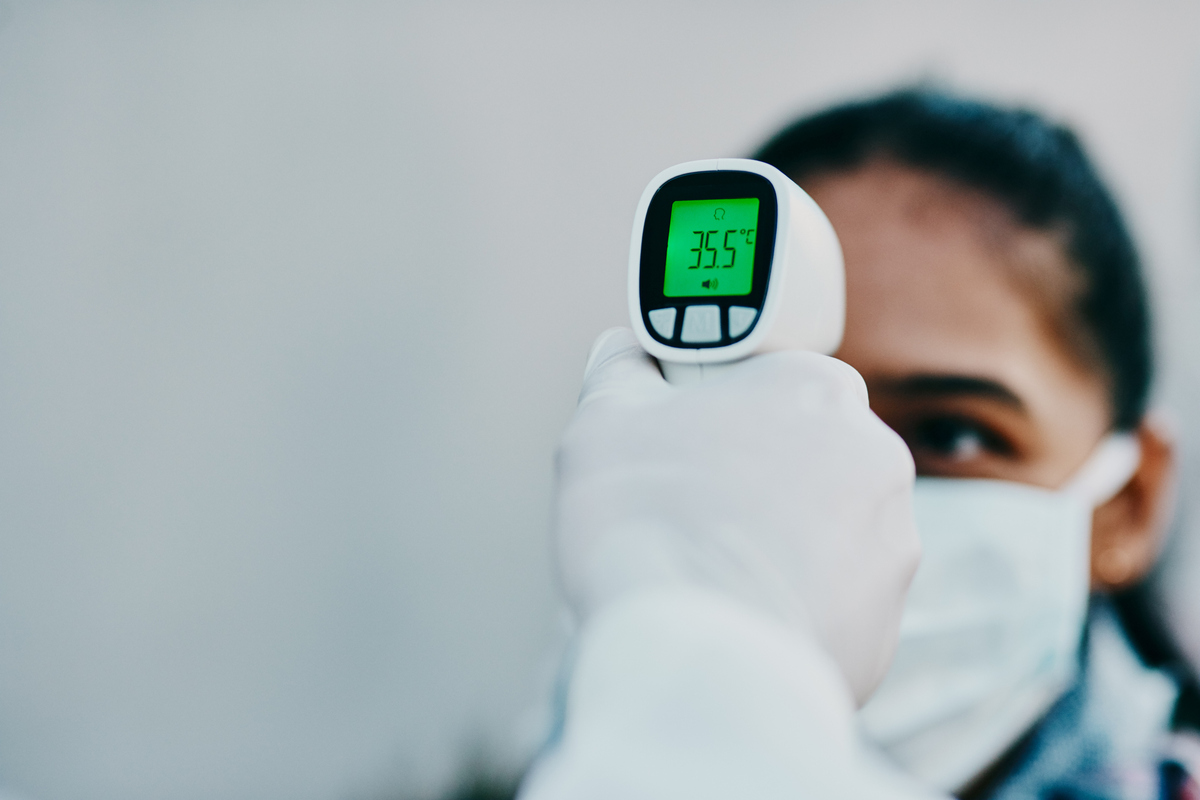 Expect to see more forehead thermometers in workplaces and airports as a way to screen people for fever, which could be a sign of COVID-19.

This is part of a series looking at pressing coronavirus questions of the week. We’d like to hear what you’re curious about. Email us at goatsandsoda@npr.org with the subject line: “Weekly Coronavirus Questions.”

More than 76,000 people in the U.S. have died because of COVID-19, and there have been 1.27 million confirmed cases across the country — and nearly 4 million worldwide. Though the virus continues to spread and sicken people, some states and countries are starting to reopen businesses and lift stay-at-home requirements. This week, we look at some of your questions as summer nears and restrictions are eased.

Is it safe to swim in pools or lakes? Does the virus spread through the water?

People are asking whether they should be concerned about being exposed to the coronavirus while swimming.

Experts say water needn’t be a cause for concern. The CDC says there is no evidence the virus that causes COVID-19 can be spread to people through the water in pools, hot tubs, spas or water play areas.

“I don’t believe that bodies of water — swimming pools, lakes or ponds or the ocean — are major ways that people can contract this virus,” says Dr. Amesh Adalja, a senior scholar at the Johns Hopkins University Center for Health Security. “Remember, it’s a respiratory virus that spreads through coughs and sneezes and common-touch surfaces. So obviously, if you’re at a pool and people are sick and touching common-touch surfaces — maybe the chairs or the tables — that can be a risk. But the water itself: No.”

But since the virus spreads through droplets, do we need to worry about those droplets in the water? Probably not.

Abraar Karan, a physician at Harvard Medical School, says there’s no data that suggests the virus could transmit through viral particles dispersed through a body of water.

The bigger concern, he says, is contact with other people while swimming.

“The key is still social distancing,” Karan says. “So if you’re in a pool and you’re having face-to-face contact and if you’re not wearing any sort of facial protection in the pool — obviously swimming with a cloth mask on your face can be dangerous for other reasons — then you can certainly still spread it in the normal respiratory way.”

Can mosquitoes transmit the virus?

This one is straightforward: No.

“This virus is not spread by mosquitoes,” Adalja says. “There are very select viruses that can be actually spread by mosquitoes. Remember, this is a respiratory virus. It doesn’t get picked up by mosquitoes in the blood, and it’s not transmitted from person to person by a mosquito. So, no, there’s no evidence that this spreads through mosquitoes.”

“We have no documented cases of insect vector-borne spread,” he says. “With most viral respiratory illnesses like flu and other things, you’re not having insects spreading them. We have no reason to think that that would be the case here either, and we definitely don’t have any data suggest that.”

I’ve been seeing forehead thermometers used at airports and to screen employees before going into job sites. Do those no-touch thermometers really work? And are temperature checks a good way to screen for COVID-19?

The raygun-like devices you’re seeing aimed at people’s foreheads are called infrared thermometers. They estimate the body’s internal temperature, and their scans are generally considered reliable if they’re used correctly.

The most accurate way to measure temperature is rectally — but that’s certainly not the most convenient or comfortable way to check for fever.

Unfortunately, the accuracy of the thermometer is beside the point: Experts say temperature checks simply aren’t very effective at identifying people with the coronavirus.

Karan points to a recent study of 5,700 patients who were hospitalized with COVID-19 in New York City. When the patients were assessed at triage, only 30.7% of them had a fever. Some went on to develop fever later in the course of their illness — but simply checking their temperature when they arrived at the hospital would not have flagged them as sick.

So checking someone’s temperature isn’t a foolproof method for identifying infectious people, when only some 30% of people who get hospitalized with the virus have fevers.

“What we don’t want to happen is that people are falsely reassured that they don’t have a temperature and that they are fine, when in fact, they could be harboring virus and transmitting virus,” Karan says.

There are potentially grave consequences for thinking that temperature scanning is effective at identifying people who are infected. A number of studies have found that people who are not yet showing symptoms of COVID-19 are likely playing a significant role in its spread. A model published in Nature Medicine last month estimated that 44% of secondary cases were infected by virus carriers who were pre-symptomatic at the time.

Another factor that diminishes the utility of temperature screening: It’s possible to reduce a fever with drugs such as acetaminophen, ibuprofen, aspirin and naproxen.

Recent experience isn’t reassuring about temperature checks, either. Thermometer guns were used widely at airports in Africa during outbreaks of Ebola. But a review of 114 scientific papers and reports last year found that between August 2014 and January 2016, “not a single Ebola case was detected among 300,000 passengers screened before boarding flights in Guinea, Liberia and Sierra Leone, which all had big Ebola epidemics. But four infected passengers slipped through exit screening because they didn’t have symptoms yet,” a recent article in Science explains. (However, that did not present a danger to other passengers because an Ebola patient must be symptomatic to transmit the virus.)

The review’s authors did find some upsides to the screening, despite their ineffectiveness: discouraging travel among sick people, raising awareness and maintaining operation of flights to and from affected areas.

But on balance, public health specialists believe that temperature checks at airports or workplaces may make us feel as if adequate precautions are being taken — without actually accomplishing much.

Nonetheless, Adalja predicts that we will see a lot of temperature screening in the weeks and months ahead. Indeed, Frontier Airlines has just announced that all passengers will be screened for temperature starting June 1.

“This is going to be something that is widely adopted because it is something that lots of people think has face validity. But there’s not really good data that it actually helps,” he says. “This isn’t something that’s ironclad and it shouldn’t give people a false sense of security. I think symptom-based screening and a lot of common sense does a lot more than temperature screening.”

In other words, ask people if they’ve experienced a dry cough, fever, loss of sense of smell and other symptoms. People should also be asked if they have been exposed to someone with coronavirus.

“Those are much better ways to gauge if somebody actually is at risk than just a simple moment-in-time thermometer scan,” Adalja says.

The CDC says temperature checks are among the optional screening methods that employers may use, along with other tactics like “a visual inspection of the employee for signs of illness, which could include flushed cheeks or fatigue.”

If employers want to encourage workers to stay home when they’re feeling sick, the CDC has another tip: “Implement flexible sick leave and supportive policies and practices.”

The Kansas City metro has emerged from … END_OF_DOCUMENT_TOKEN_TO_BE_REPLACED

A study finds that improving ventilation can … END_OF_DOCUMENT_TOKEN_TO_BE_REPLACED

The MUSA robotic platform, developed by MicroSure. Image: MicroSureA surgical robot capable of reconnecting vessels with diameters as tiny as 0.3 millimeters has been tested on human patients, and the results are promising. New research published in Nature Communications describes MUSA—the first robotic system designed exclusively for performing reconstructive supermicrosurgery. Using the system, surgeons were able to reconnect vessels with diameters between 0.3 and 0.8 … END_OF_DOCUMENT_TOKEN_TO_BE_REPLACED

Benefit to Employee HOW DOES THE EMPLOYEE BENEFIT? The employee can choose to participate in the plan or not. If the employee participates in the plan part of his/her taxable wage is converted into tax-free benefits. This can be a big tax savings for the employee and … END_OF_DOCUMENT_TOKEN_TO_BE_REPLACED